iT Program in the News

Home>About > iT Program in the News
Robotics on the News 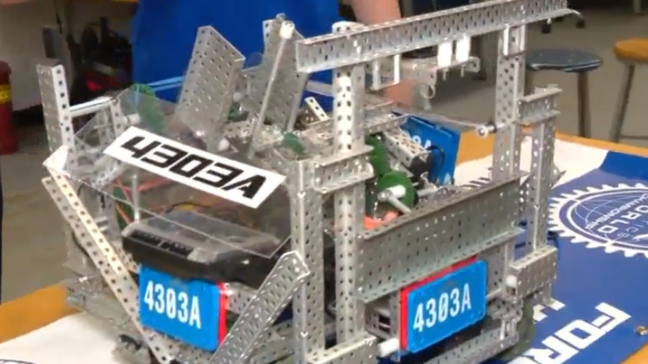 The Forest Park High School robotics team gives an inside look of their design for a competition. Monday, Aug. 26, 2019. (ABC7 photo)

PRINCE WILLIAM COUNTY, Va. (WJLA) — Every Prince William County school has a robotics team including at Forest Park High in Woodbridge. The team is one of the best making it all the way to the world championships in 2018.

There are approximately 20,000 robotics teams worldwide and Forest Park High School was one of them.

The team created a robot from scratch this year and they are developing different structures to win the competition.

We are proud to announce that this was our most successful trip to VEX World’s. It was the first time we had two teams qualify for the World Championship, Team 4303A and Team 4303C (see rosters below).  As mentioned earlier, 12 teams qualify for World’s from the state of VA.  The tournament is broken up into 6 divisions each with 100 teams.  Virginia teams were among the best with top 3 finishes in 4 of the 6 divisions.

Team 4303A is made up of underclassmen, so making it to World’s is an amazing accomplishment.  They had some success and learned lots along the way and hopefully they’ll be back next year.

Team 4303C is made up of Juniors and Seniors.  This team had an amazing tournament.  Our 4303C team finished 3rd in their division with a record of 10-1.  They unfortunately lost in their divisions tournament.  Watching all the robots throughout the week, including the final tournament, their robot was among the best and could compete with any of the other teams.

In addition, they won the Think Award for their division.  This award is given to the team with an impressive and effective autonomous programming.  During each 2 minute match the first 15 seconds the robot operates in autonomous mode (on its own with no driver input).

I want to especially thank Ms. Karen Cinnamon for all her help.  She puts in countless hours.

A Forest Park High School student is the winner of a recent art competition. Amelia Daum, a junior, took home the grand prize of the Prince William County Service Authority’s (PWCSA) Water Art Invitational. Her black and white photograph featured her lab as he fetches a stick, according to a release. “He’s mainly good at going out and getting stuff [from the water],” Amelia said in a release. “When he comes back with the stick, we give him a treat.” Amelia was one of several Prince William County students recognized at the annual invitational, which was held at the Raymond Spittle Building in Woodbridge on Thursday evening. “The Water Art Invitational is a unique vehicle to raise awareness about the value of clean water and engage students in environmental stewardship,”  Deputy Communications Director Kathy Bentz said in a release. Event organizers dedicated the program to former Supervisor John Jenkins, who passed away last month.  Other iT students who won awards:

Four of our robotics teams competed in the VA State Robotics Championship.  One of our teams finished 6th in qualifying.  As the 6th team they picked another one of our teams as an alliance partner.  Together they made it to the Semifinals which qualifies them for the VEX World Championship (more on that later).  Only 12 teams are invited to Worlds from the state of Virginia, and we have two of them.  Above are the two teams that made it to Worlds, 4303A & 4303C.

Aidan Clarke was accepted into the Calhoun Discovery Program in the Virginia Tech Honors College! The Calhoun Discovery Program emphasizes collaboration, participation, imagination, and discovery related to technological innovation with societal impact. This is a highly competitive and prestigious program that enrolls only 50 students each year. It gives him the time, space, and resources to work with others, including our industry partners, on critical issues facing our world today. At the successful completion of the program Aidan will receive an Honors Collaborative Innovation Diploma in tandem with your Bachelor’s degree in your chosen major.

Avery Engstrom was awarded an Honorable Mention for two illustration pieces from Scholastic Art  Awards. She was one of five students across Prince William County who were recognized for this national event.

Our robotics teams competed in a tournament at Osbourn Park HS on Saturday December 15, 2018. All 6 of our teams made the tournament after the qualification round.  One of our teams went undefeated and won the tournament.  “Championship!” As tournament champions they’ve been invited to the State Tournament in March.  Please congratulate the following on their accomplishment this weekend.

Up against the best in the world, John “Jack” Dumoulin, rising senior at Forest Park High School, brought home the champion’s trophy from the Microsoft Office Specialist World Championship held July 30-August 2 in Anaheim, California. He headed into the competition with state and national titles to his name.

Dumoulin credits his achievement in part to his teachers who have assisted him on his journey. He is enrolled in the Information Technology specialty program at Forest Park High School, where he has earned Microsoft Certifications for Access, Word/Excel Expert, Word, and PowerPoint.

Dumoulin, a self-professed “numbers guy,” shared some statistics. Over a million students aged 13 to 22 from 124 countries submitted qualifying tests, including 320,000 from the United States. There were 200 competitors for six categories; Dumoulin won Excel 2016 for the USA, and $7,000.

May 11, 2018 – U.S. Sen. Mark Warner had high praise for students and staff at Forest Park High School during a visit to see the work of the Virginia Student Training and Refurbishment program—better known as VA STAR. The Senator came to acknowledge the students’ great work fixing and updating surplus computers that be will soon be given free to five schools across Virginia though the Computers for Schools Program.*

That’s just the tip of the iceberg for VA STAR. The program began at Forest Park, spread to multiple Prince William County Public Schools and now, with PWCS help, continues to help schools across the Commonwealth. Currently in 70 schools in 44 districts, VA STAR teaches students to refurbish surplus computers and related hardware from government agencies and private companies.

Upgraded equipment goes to families, organizations, and school districts that otherwise couldn’t afford it. Students who do repairs, refurbishing, and updates gain expertise to help them earn industry-standard certifications that can pave the way to higher education and well-paying jobs.

Senator Warner praised VA STAR and Forest Park for preparing students for the their future.

“We’ve got to make sure people are equipped with the skills to have the kind of jobs they’re going to need in the 21st Century,” he said. “Your ability to demonstrate you’ve mastered this skill is going to be the key to your career.”

During his visit Senator Warner met a graduate of the Forest Park’s VA STAR program who now runs SLABLE, a local information technology and communications solution company. High Tech leader Karl Stallknecht credits his success, in great part, to the experience he gained at Forest Park.

VA STAR is paying off for those in need too. To date it has fixed, upgraded, and even trained many of the new owners of more than 14,000 computers.

The program is coordinated through the SPARK Education Foundation of Prince William County Public Schools, primarily from the model-site at Forest Park High School.

DATELINE – A team of students from Forest Park High School in Woodbridge Virginia recently concluded an exceptional round of competition in the tenth season of CyberPatriot – the Air Force Association’s National Youth Cyber Defense Competition.

Established by AFA in 2009, CyberPatriot is designed to excite, educate, and motivate students toward careers in cyber security and other science, technology, engineering and mathematics (STEM) disciplines critical to our nation’s future.

CyberPatriot’s core program – the National Youth Cyber Defense Competition – challenges teams of students across the United States, Canada, and from DoDD schools abroad, to find and resolve cybersecurity vulnerabilities in simulated environments. Top teams from the preliminary online rounds earn an all-expenses-paid trip to Baltimore, Md., for the in-person National Finals Competition, where students compete for national recognition and scholarships.

The CyberPatriot field is divided into three divisions – the Open Division for public, private, and home school teams; the All Service Division for JROTC, Civil Air Patrol, and Naval Sea Cadet Corps teams; and the Middle School Division. Based on the results of two preliminary rounds, CyberPatriot X high school teams were categorized within their divisions as Platinum, Gold, or Silver Tier teams, with Platinum Tier teams representing the highest scoring teams.

Led by Coach Mike Wiczalkowski, the team of students from Forest Park High school excelled in the CyberPatriot X State Round held Jan. 19-21, demonstrating teamwork, critical thinking skills, and technical knowledge key to a successful career in cybersecurity. The team’s performance earned it State’s 2nd Place Award and a spot in the Platinum/Gold/Silver Tier Semifinal Round held this month.